watercentre@kth.se,Posted on 2019-09-042019-09-19
The challenge of water and sanitation is one that unites us all around the globe. While the context may vary from country to country, we can also learn a lot from each other, as illustrated by a recent visit of Tanzanian students and professors to Värmdö.

Only 50% of Tanzania’s population of 56 million inhabitants has access to an improved source of water supply and only 34% of the population has access to improved sanitation. These kind of statistics are omnipresent in water and sanitation studies and reviews. However, the impacts of these dreadful situations are often overlooked, meaning that no follow up study to understand the daily impacts of such statistics on the population are made.

The arid climate of Tanzania renders the supply of clean, sanitary water very difficult for people unless they live near one of the three major lakes which border the country. Consequently, groundwater has become an important source of water supply in the country. The issue is that many of these groundwater wells are located in areas near toxic drainage systems (sewage/industrial waste & agricultural runoff), leaking and contaminating the groundwater. As a result, Tanzanians often turn to surface waters which often contain bacteria and human waste. A lot of people have no choice but to drink, bathe and wash their clothes in these polluted waters. The impacts of this unsafe usage of water are disastrous. According to the Tanzania National Website, water-borne illnesses (malaria, cholera, etc) account for over half of the diseases affecting the population (National Strategy on Gender and Climate Change, 2013)!

The situation in Tanzania today is far from being fixed, but the government and the population understand the importance of having access to safe water and sanitation. One of the ideas that has recently emerged is to install more decentralized off-grids water and sanitation networks. This would give access to water and sanitation to those geographically disadvantaged. It is in this context that professors and students from UDSM (University de Dar es Salaam) came to WaterCentre@KTH for a day to discuss and see examples of decentralized water networks in Stockholm’s archipelago. The newly formed off-grid water supply fellowship travelled to Värmdö municipality for the day. Although our journey was not as adventurous as Tolkien’s fellowship, water in the future will surely be as precious as the one ring, have no doubt about it.

Värmdö Municipality is comprised of a group of islands (more than 10 000 islands) to the east of Stockholm, Sweden with a population of roughly 40 000. Limited soil cover means the creation of a municipal water system is very costly. The municipality is currently undergoing a shift from seasonal to permanent residency and unprecedented growth which leads to increasing water demand. While yearly effective precipitation is sufficient to meet this demand, during the summer season very little groundwater recharge occurs, leading to local groundwater decline and environmental stresses such as salinization of groundwater due to the very low storage capacity in the hard rock. In addition, as climate change prognostics predict an increase in duration and intensity of the summer season, it is likely that this municipality will face more challenges in meeting future water demands (Robert Earon, 2019).

Now, obviously the conditions in the Swedish archipelago are quite different from that of Dar. Technology plays an important role but what works in the Swedish context might be inappropriate in Tanzania. However, there’s a lot to learn about the organisational setup in dealing with local water and environment challenges in an off-grid setting. 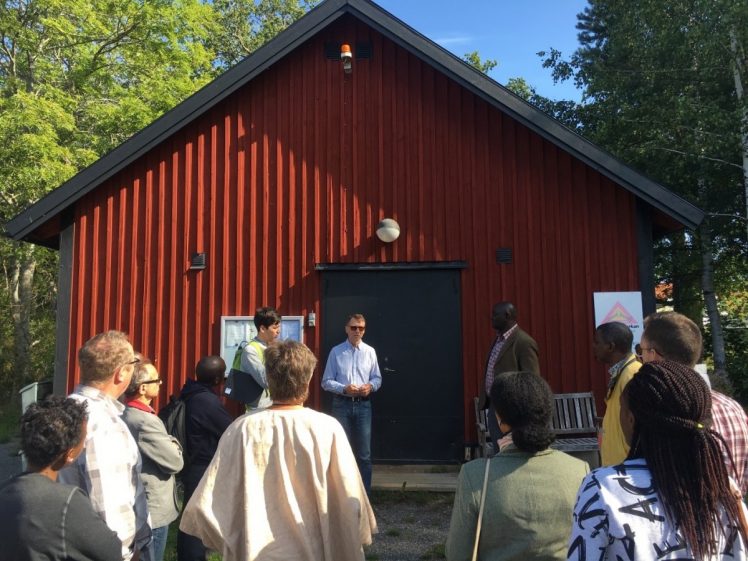 Figure 1. Employee of the Marina & the group standing in front of the small-scale water treatment plant.

Next, the fellowship moved on to Aspvik to meet with Johan Neuman, a local entrepreneur who showed just how effective getting a local community to work together can be. This part of the municipality did not have access to the municipal water and sewage network. Rather than waiting an unknown yet certainly high number of years for the municipality to invest in connecting Aspvik to the municipal network, this local entrepreneur thought to himself “Why not just do this ourselves?”. A valid question which, in my opinion, is asked but too rarely. The municipality agreed to let the local community do this, but only if everyone in Aspvik agreed to it. In other words, every single household in the community would need to have a connexion to the network. And after only a few years of planning, organizing, digging and laying of pipes, the project was finished, resulting in the local community being connected to the municipal water and sewage network. This was a great example for students and teachers from Dar to see what a welded and organized small community can accomplish. Now one main diverging factors is the financial means of the local Aspvik community, who were able to complete this project thanks to the sizable investment made by each resident. It seems evident that small communities in Dar do not have the same financial means, yet the idea of taking matters into their own hands resonated with the professors and students. 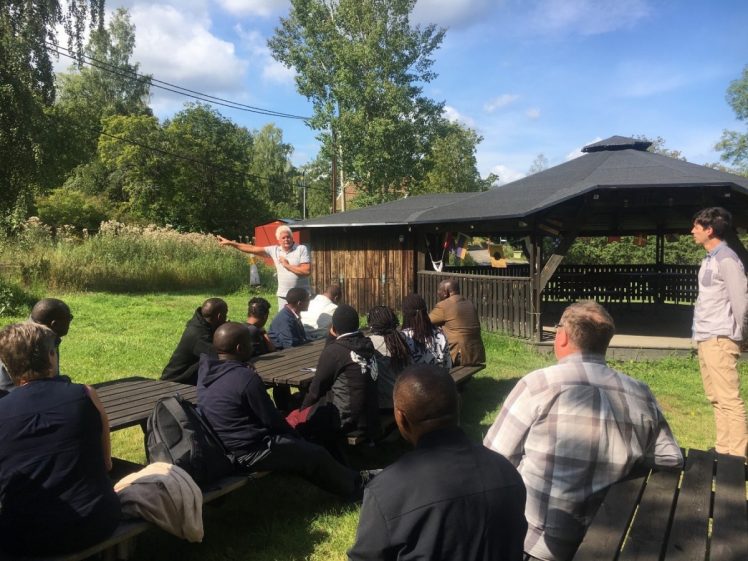 Figure 2. Local entrepreneur explaining with passion how the project of connecting the local community to the municipal network was lead.

After a well-deserved lunch in Gustavsberg where the delegation from Tanzania was able to have a taste of Sweden’s famous fish and salad bar, the fellowship moved on to a meeting with the municipality of Värmdö. Employees from the municipality explained to everyone how the municipal water and sewage network was managed, how zones for expansions of the network were chosen, and how private wells and sewage treatment were documented and regulated. The short presentation was followed by a discussion were students and teachers asked questions and talked about the similarities and differences in the challenges met by both countries and the potential solutions. 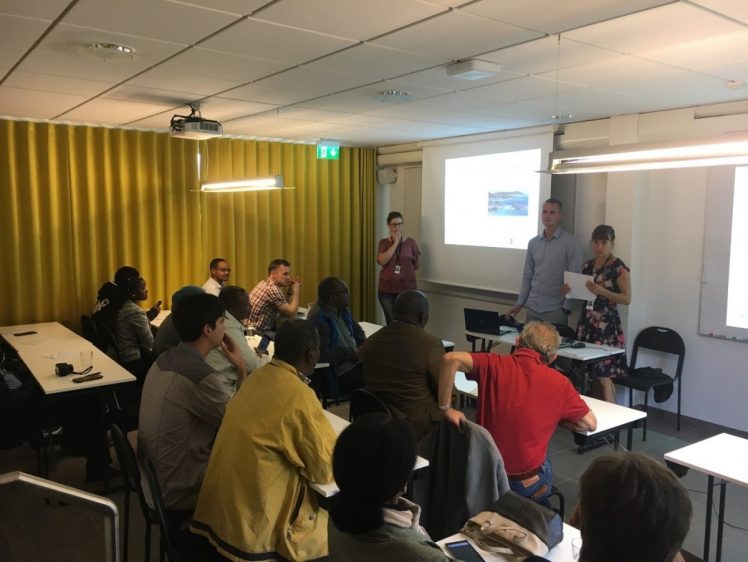 The final stop on our adventure was Återvall, where Robert Earon lead the fellowship on a journey through the terrain laying on top of an aquifer. He explained the hydrogeological characteristics of the aquifer and its importance for the local community. This highlighted an important aspect of water and sewage networks, the knowledge of the land. Without proper geological and hydrogeological studies, it is impossible to use an aquifer safely and to its maximum potential. This was also the occasion to mention the concept of circular water use, by explaining the managed aquifer recharge using lake water which used to take place here in Återvall. 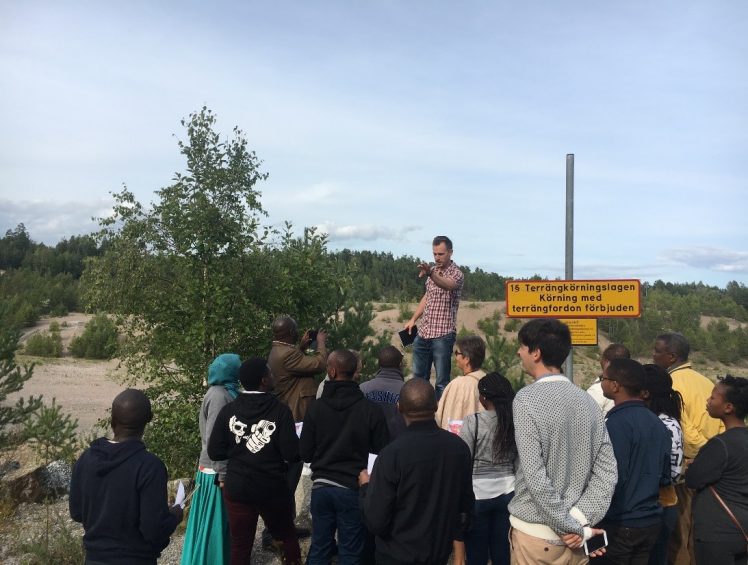 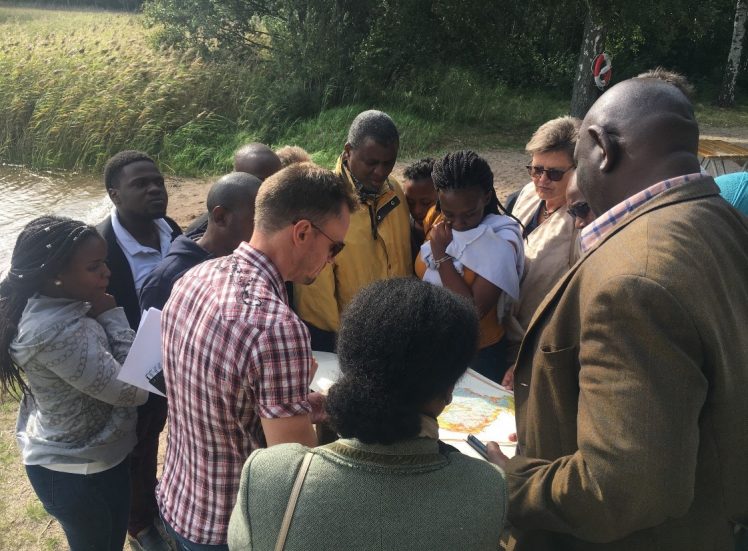 Figure 4-5. Robert Earon explaining the hydrogeological characteristics of the aquifer.

Then came the inevitable drive home which provided ample time for students, teachers and KTH employees to further discuss and reflect on the day’s journey. Overall, I believe everyone had a really fun day and a fruitful learning experience. Now while the ring might not have been destroyed yet, the long path which lays before all of us to provide safe drinking water supply and sanitation to the world has become, maybe, just a bit clearer.

Doeringast, Ernest. The Reform of the Water Sector in Tanzania, (2005)