1.3.4 Dry toilets – the basis of a sanitation enterprise in Dar es Salaam 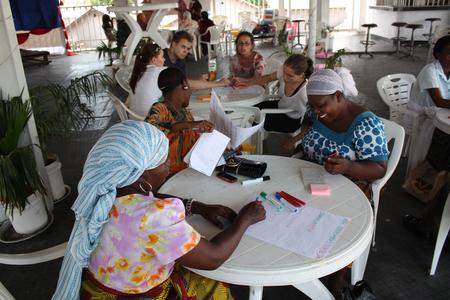 A group working on a sanitation project in Keko Machungwa together with students from Aalto University. Photo: Zita Floret

An easily constructible dry toilet, developed by students at Aalto University, Finland, proved a robust  basis for better sanitation and a business enterprise in Keko Machungwa, a poor settlement in the city of Dar es Salaam, Tanzania. The business opportunities developed included the construction of toilets, sale of fertiliser and farming of organic vegetables.

At the start of the project the students meet with a group of several women and a few men who were already working on a sanitation project in Keko Machungwa. This group was supported by the Centre for Community Initiative in Tanzania, a non-profit organisation aiming to improve quality of life in informal settlements and rural settings by supporting micro finance community-driven development activities.

The students involved had different specialities; environmental engineering, design, architecture and business. As the group had no prior experience of sanitation, the first step in the project was to collect background information ahead of going to Tanzania to meet with the community in Keko Machungwa. Once there they worked together with the community group to find solutions, coming up with a theme for a dry toilet as the basis for a sanitation business.

The students decided to design a prototype dry toilet with capabilities for water harvesting, composting and urine separation. Dry toilets are hygienically far superior to the existing solutions in the settlement, and they can also be used to produce fertilizer. The prototype developed by the students had to be of excellent quality, so that the community project could actually make a profit by using the toilets, e.g. by selling fertilizer.

One important aspect of the design was that the project members from the community had to be able to produce the new toilets themselves and develop the business.  Dry toilets had been tried before but they were not used and were considered too expensive. As a result of the project, women and men in the community now act as dry toilet technicians and also have developed their knowledge of rural sanitation requirements. This local group will work to expand the business, making more toilets and educating the rest of the inhabitants of the settlement in sanitation and hygiene. Some of the students will also be part of this development, as the Finnish Government has granted funds to realize this dry toilet business in Keko Machungwa.

The model of the dry toilet developed by the students is not only cheap and easy to produce; it is also an improvement on earlier models. For instance, the toilets are able to harvest rain, which also makes them cheaper as it is not necessary to provide water for hand washing. The project has now developed plans for how to use the dry toilets at public schools. The toilets should be placed around a garden area where the compost produced can be used directly, and the harvested rainwater can be fed to the hand washing areas in the school.