For understanding and predicting the evolution of fusion plasmas, consisting of some 1 000 000 000 000 000 000 000 particles, we need sophisticated mathematical and computational models. Since individual electron and nuclei behaviour fortunately can be averaged over, plasma theories typically deal with large collective distributions of particles or with fluid elements representing several billions of particles. The resulting models are still highly complex and standard numerical computations of, for example, a single second of turbulence in a plasma device may take days on a state of the art computer. Time-spectral methods, however, replace traditional time stepping with analytical approximations in much larger time intervals.

What are the advantages of time-spectral methods?

The time evolution of a fusion plasma is traditionally modelled by partial differential equations, where the time dimension is represented with finite steps. Numerical stability and accuracy usually require these steps to be severly limited in size. This restriction, typical for so-called explicit methods, can be lifted and poor accuracy of implicit or semi-implicit methods can be remedied by employing spectral functions. We have thus developed the Generalized Weighted Residual Method  (GWRM), which uses Chebyshev polynomials for an ansatz solution in all temporal, spatial and parameter spaces. More specifically, we assume that the particular problem of interest can be cast in the form

is inserted into the equation. Having decided the orders (\(K\),\(L\),\(M\)) of the expansions of the Chebyshev polynomials \(T\) in time, space and parameter space, respectively, an approximate analytical solution to the problem is finally found by determining the coefficients \(\mathbf{a}_{klm}\).

This may seem simple enough, but in order for the GWRM to be efficient, using only reasonable amounts of memory space, a number of supporting algorithms have been developed by our group. These include algebraic methods for spectral space, state of the art root solvers, spatial subdomain techniques and parallelization procedures.

What problems in fusion are addressed?

The GWRM can be employed in a number of fields in physics and has efficiently solved problems in, for example, chaotic weather dynamics , compressible fluid flow (Navier-Stokes equations), nonlinear magnetohydrodynamics and two-fluid turbulence.

A target of prime interest is plasma turbulence, since control of turbulence is crucial for high performance fusion plasmas. Below we show a GWRM computation of the so-called Orszag-Tang vortex, obtained by solving the compressible nonlinear magnetohydrodynamic equations. The four panels illustrate how steep gradients in the magnetic field develop over time.

Our research is also aimed at solving initial-value problems in kinetic plasma theory, in particular pressure driven resistive instabilities in the reversed-field pinch (RFP). Initial-value problems in kinetic plasma theory are traditionally solved using time stepping methods. Due to the high dimensionality (time plus at least one spatial and one velocity space dimension), the GWRM may substantially reduce computational time using smoothing techniques.

In order to manifest the full potential of the GWRM, computational algorithms need to be developed further. In parallel, we apply the GWRM to problems of interest for optimizing fusion plasma performance. Some research areas of current interest are listed below.

For a master's thesis we may suggest either of two types of projects: 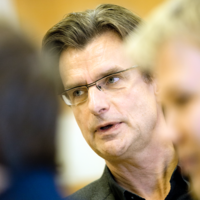