“No matter how many people take to the streets in massive marches or in targeted direct actions, they cannot put their hands on the real flows of power, because they do not help produce it. They only consume.” (p. 60) 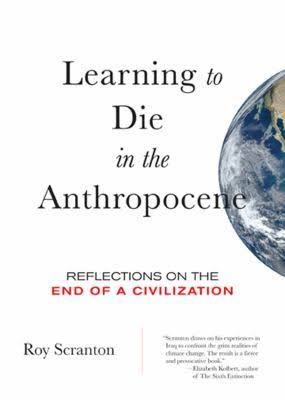 In the end of last semester, our division’s reading group discussed Learning to Die in the Anthropocene: Reflections on the End of a Civilization by Roy Scranton, a US veteran with a PhD in English. Certainly, the book is not new, but it was new to us and the jacket reviews—written by public personalities such as Naomi Klein, Elizabeth Kolbert, Rob Nixon, and more—along with the short length of the book gave us pause to put it up for discussion and review.

Based on an essay he wrote for the New York Times, the book tells a story of a global environmental catastrophe—attributed to the burning fossil fuels and its effects on the climate system—and the inability of the current political, economic, and social structures to address the impending disaster. In his words, “we’re fucked” (p. 16). The world has gone to shit, and the global capitalist system is “over,” implying that it has outlived its usefulness, and that if humans are to survive the coming storm people must “learn how to die” together (p. 24).

In Iraq, Scranton imagined dying again and again in order to survive; but, in the context of climate change, Scranton argues that it is not enough to come to terms with our own individual death. He says we must learn to die as a civilization. The only way humanity will survive our civilization’s demise will be to “[rework] our collective stores of cultural technology” (p. 23)—which he means, by way of example, classical works of philosophy and literature. Using these canons as our guides, Scranton argues that we must accept human limits and transience, and face our individual fears head on. We must detach ourselves from our carbon-fueled civilization. How to do this effectively, according to Scranton, is to practice philosophical reflection, a performance he equates to an interruption. It is the philosopher-interrupter, such as Socrates, who is equipped to handle the conceptual and existential questions that a global cataclysm presents to us. It is them who contribute to preserve a diverse human heritage that can help free ourselves from the norms of a broken civilization.

Scranton structures his argument as a story. The plot goes something like this: human societies and their recent energy transition to carbon and other fossil fuels have created climate change, a global environmental catastrophe (chapter 1). This transition has led to a tenuous global society, which thinks it can fix climate change but really can’t, because its very existence depends upon burning more fossil fuels and because drastic interventions must happen now. Technological and economic solutions are bound to fail (chapter 2). Political solutions will also falter, not just because a powerful minority controls the “decentralized flows of oil and gas,” making intervention very difficult for the global citizenry, but also because everyone—including our governing structures—depend upon these energy flows (p. 25) (chapter 3). All this builds up to threaten our very existence by which we should respond, not by “vibrating” with or passing on our fears, but by recognizing our own mortality (chapter 4) and engaging in a humanistic “communion with the dead” (p. 92) (chapter 5).

The story is written with flair and style. Scranton has a talent for synthesizing big ideas, giving us stories and reflections from his time serving in Iraq, a swift climatological history of Earth, scientific summaries that clearly indicate a warming environment, an overview of climate activism worldwide, and important lessons that can be drawn from such foundational texts as The Epic of Gilgamesh.

For a room of humanities students, we could appreciate the central argument, the way the story flows, and the inevitable simplifications and omissions that would make the book accessible to the public and carry the message to a wider audience. However, we could not help but find certain simplifications problematic and would have preferred a deeper development of the main argument along with many of the book’s key points.

For example, though Scranton claims that all of us are the problem, much of his argument actually centers on pointing to global capitalism and its most powerful actors as the main culprits. By saying that the enemy is everyone, he negates any possible solutions for interrupting material flows of power that fuel global capitalism, which, in turn, spurs climate change. As also argued in the Los Angeles Review of Books, this contradictory assignment of responsibility—humanity or capitalism—makes it difficult for readers to follow the structure of the argument and therefore to critically assess the solutions he puts forth towards the end of the book.

As a result the book’s final chapters, which seek to develop a path forward out of the crisis, felt unsatisfying. In sum, Scranton wants us to practice philosophy so that we can answer the existential questions that a planetary-wide catastrophe inevitably produces. By practicing philosophy, we can overcome fears about climate change and our attachment to current societal norms. Detaching ourselves from this civilization, we may hope to interrupt our stake in its survival. This interruption, moreover, allows us to continue cultivating our collective humanistic heritage, a necessary condition for surviving the oncoming cataclysm of climate change. This heritage, illustrated with eclectic examples from western canon, buddhist philosophy, etc., remains rather undefined. Logically, the author’s faith in humanity’s heritage is a bit puzzling, since if humans are the culprits, parts of this legacy ought to have been responsible for the development of our current global condition. If, by contrast, Scranton is arguing that the issue rather lies with capitalism, should he be giving more practical considerations as to how to move away from this particular economic system in which we are trapped? But this would not be possible in the context of this book, it seems, since it would contradict the author’s view that people are powerless to change or confront capitalist power. 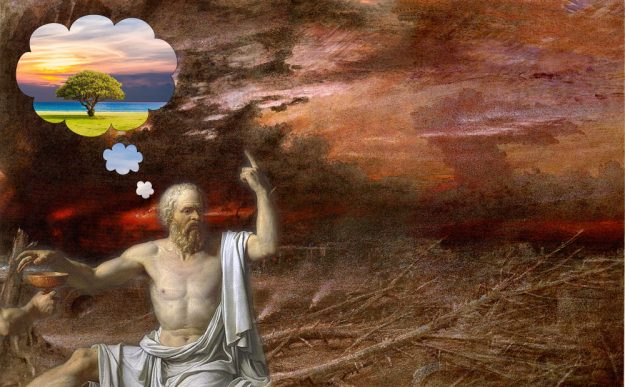 In the end, the author’s moralistic approach fails to convince. Scranton’s lack of faith in the future of our civilization is summarized in this review’s epigraph. Most of us did not adhere to his argument that our society has become one of pure consumerism having lost all ability to interrupt the flows of power in a concrete, material way. Turning to the conceptual interruptions by immersing oneself (or one civilization) in the classics seems like a self-serving solution which conveniently avoids the hard work of collectively building another world.

But let us stop here. A detailed scholarly critique of the text would be unfair. Rather, the value of this book for an academic audience lies in its ability to entice us to think differently about communicating catastrophe, narrative and storytelling, violence, power relations, and the relevance of humanities scholarship. In that sense, this book offers food for thought without filling you up.

We think this a decent story, albeit one that relies heavily upon the pathos of catastrophe. The historian William Cronon says that “the difference between beginning and end” of a story “gives us our chance to extract a moral from the rhetorical landscape. Our narratives take changes in the land and situate them in stories whose endings become the lessons we wish to draw from those changes” (pp. 1368-1370). Judged as a story, we thought Learning to Die in the Anthropocene was a compelling, thought-provoking read. The narrative sped along, and it wasn’t until the climax and resolution that we felt a disconnect. We perhaps see that philosophy can teach us how to die, giving us the ability to see the world and ourselves in new ways. Yet, we also need the entire range of the humanities—such as history, visual and performing arts, anthropology, literature, politics— to aid not only in this reorientation of vision but also in action. If we accept that humanity is at fault for creating conditions of a major planetary catastrophe, we must admit that some of us are more at fault than others. In that sense, one ought to interrupt to reset power imbalances not just conceptually but also materially. Knowing how to die means that we know when to die, and for some of us, that time has not yet arrived.

Complete list of reading group books can be found here!