Sofia Jonsson,Posted on 2021-09-272021-09-27
Categories Categories: DefenceTags Tags: EHL, environmental history, environmental humanities, environmental justice
Friday October 1, it is time for Irma Allen to defend her thesis Dirty coal – Industrial populism as purification in Poland’s mining heartland. The defence is open for the public by registration, and will happen on zoom. Find link to registration below, as well as the thesis abstract! 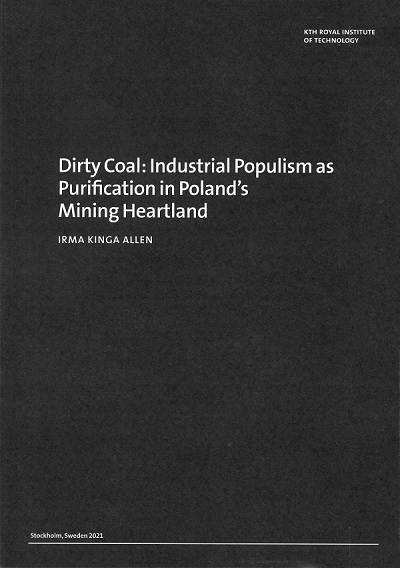 In the second half of the 2010s, far-right populist parties gained increasing power and influenceacross Europe, and around the world. Core to their ethnonationalist, anti-elite agenda, and theiremotive politics, has often been a defense of fossil fuels, threatening action to address the climatecrisis and raising the spectre of fascism. Increasingly-perceived-as-‘dirty’ coal, the raw material thatmade the industrial modern world order possible and contributed most to its mountingcontradictions, has acquired a special status in contemporary far-right ideology. What is theemotional intersection between them at a time of far-reaching economic, environmental and energyinstability and change, when coal has not only been losing its material value and its symbolic link tomodernity, but is increasingly widely deemed immoral too?

To date, studies of far-right populism have largely overlooked how energy and environmentalchange feature in their present rise. This reflects how these issues have been largely treated astechnical matters, and therefore relegated to the domain of scientific expertise, rather thanrecognized as inherently social, cultural and political concerns. Tending to adopt a macro-levelapproach, far-right studies have also not yet fully addressed the historically, geographically, andculturally-situated reasons for this success, particularly among the (white, male) industrial workingclass.From a bottom-up, ethnographic perspective, the role of intersectional (class-based,occupational, gendered, racialized regional and national) ecologically-positioned embodiedsubjectivities and identities and their emotional lived experience remains to be considered.

This PhD thesis, set within the concerns of a transdisciplinary environmental and energy humanitiesframework, addresses this lacunae in the context of Poland; the most coal-dependent country in theEuropean Union where a pro-coal platform unexpectedly helped the far-right populist party Lawand Justice (Prawo i Sprawiedliwość) into majority government in 2015. It is primarily based on ayears’ ethnographic research conducted in 2017 with both residents and particularly coal miners andtheir families in a minescape in Upper Silesia, the nation’s, and one of Europe’s, last remainingmining heartlands. Adopting a postcolonial postsocialist perspective, and drawing on rare empiricaldata from participant observation and qualitative interviews, the thesis explores the politics ofincreasingly ‘dirty’ coal expressed in localized conflicts over air pollution, domestic heating, andthe meaning of work, dignity, respectable personhood, the economy and community, setting themwithin their historical context. The rapidly shifting material and symbolic meaning of coal withinthe context of Silesia’s long-standing troubled history is particularly studied in light of Europeanintegration, a post-industrial, neoliberal, ‘green’-cosmopolitan project that links East and West in anunequal relationship. The naming of coal and its way of life as increasingly ‘dirty’ in newlystigmatizing senses from ‘outside’, is found to be experienced by the mining community as an eliteimposedprocess of ecological dispossession. This generates a toxic intersectionally-andecologically-mediated shame in the bodies of those that particularly labour intimately with itsmaterial touch; a shame that resonates with what this thesis terms industrial populist politics and itsemotive charge as a felt common sense. In the postsocialist context of the marginalization anddevaluation of industrial working-class lives, and pervasive and normalized orientalist classismexperienced as an attack on one’s ecologically-enmeshed Silesian-Polishness, the relational longingfor a sense of a purified home, that can cleanse dirt’s discomforting and shame-inducing stigmas inoverlapping economic, social, cultural and environmental terms by refusing and reversing itsdesignation, is proposed as lying at the heart of industrial populism’s visceral draw.