A packed room with 500 people cheering and clapping hands in front of the stage. Walls covered with photos of rock icons like Bowie, Rolling Stones and Joni Mitchell. Am I really at a conference on small scale water and sanitation? 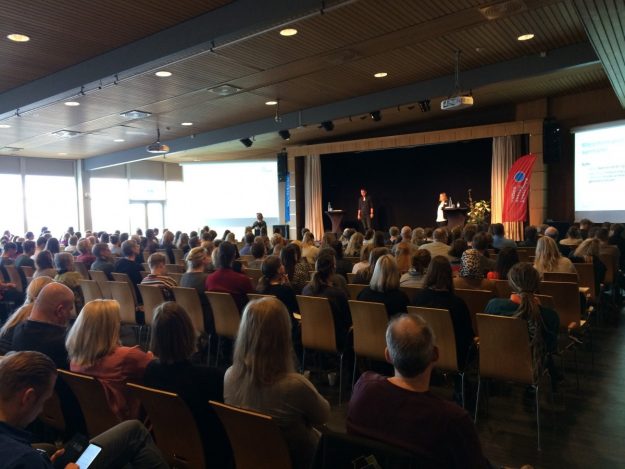 Yes – the conference organisers had the good taste of staging the VAK2019 conference on circular water and sanitation solutions in the Tylösand hotel whose proprietor Per Gessle (Roxette) has turned the establishment into a permanent rock and pop art collection. For two days, these rock and pop culture giants look down at us from their passe-partouts, peeking out from behind the sales materials and pop-up stores of mini-sewage treatment plants, filters, tanks and toilet seats. And it feels… just right.

Come on. Why should there the be even the faintest connection between rock ’n roll and something as unsexy as water and sanitation, you ask?

Because there’s a revolution coming in water and sanitation. The emerging shift to a circular water economy is an outright revolt against age-old principles and norms. A new generation of professionals and consumers are taking up a fight against the burden of history, breaking out of traditions, and charting a new and independent path. If that isn’t Rock ’n Roll, then nothing is.

Maybe I’m getting carried away by the atmosphere in the company of like-minded. So let’s do a recap.

Essentially, most of our so called ”modern” water systems are based on principles of linear transport, which hail from the Middle East and Meditteranean great cultures. The flush toilet is more than 3000 years old. Although the Roman Empire went down their technology, organization and water legislation lived on and was picked up as an ideal in Europe’s 19th century modernisation processes. ”I will turn Paris into a Rome of today” said Baron von Haussmann, as he led the cleaning up of the city and built an extensive sewer network (Reid 1991). The ”Modern Infrastructure Ideal” of networked water and sewerage systems that still dominate the cities of the world are not modern. Essentially, they are antique.

But the global water regime is now under pressure of a magnitude it has not seen since the collapse of the Roman Empire. Why? Due to its inherent logic requiring unrestrained and stable supply of raw water. But worldwide, water scarcity and climate change are now very real.

This transformative pressure has already led to change. Waste water is reused in Spain, Portugal, Israel, Greece, the United Arab Emirates, Australia, the United States and China. Especially for irrigation purposes in agriculture. At 60% of all irrigated agricultural land in Israel, recycled wastewater is used. Also so-called “urban re-use” is on the rise, e.g. flushing, cleaning, golf courses etc. And it is economically beneficial. A study in Hong Kong showed that investment in treatment and reuse of gray water for toilet flushing at property level is profitable already after five years of operation.

But Australia and Hong Kong is very far away. Is re-use of wastewater realistic in Sweden? Two things are clearly pushing us in this direction: the hunt for water and the hunt for energy.

Water is already in short supply in parts of Sweden. We are repeatedly affected by drought, especially during the summer months. More than half of Sweden’s municipalities reported water shortages 2018 and 85 of them issued irrigation bans or other restrictions. Last year Värmdö municipality terminated the service agreement with one of the golf clubs in the municipality. No more tap water for the fairways and greens.

So why not look for opportunities to use the freshwater once more? A number of researchers and students from KTH now investigate precisely this on seven islands in the Swedish, Finnish and Åland archipelago. Within the Circular Water Challenge, as the project is called, we work with the local people, the business community, the municipalities and county councils, and with other experts. Lessons learned on these micro-systems will benefit many others. Together with IVL, KTH also runs Hammarby Sjöstadsverk where we investigate how we can improve costs and performance of circular technology.

Secondly, new requirements for energy efficiency in buildings drive property owners to recover the heat in the wastewater. Some property owners are now thinking about the next step. They investigate the possibilities of reusing the actual hot water. Why not spin around the hot water for showers and basins? This is already happening and in a FORMAS-funded project we investigate what this can mean in the long run.

Yes, but this is only marginal, you might say, what would a few islands or isolated properties matter? The thing is that this is always how technology shifts begin. They start in the margin, in so-called “niches”. We already see municipalities that are planning for entire districts based on a circular principle, such as in Helsingborg. And then things start to happen with the large systems.

So when is the revolution coming? It might come sooner than we think. As I wrote in a blog over a year ago we could face a future where network consumers use both less water and energy. And this may trigger a spiral that make the systems change unexpectedly fast. Surely, we are just in the beginning of the revolution and much work remains.

But I say like Bob Dylan: ”I know a change is gonna come, oh yes it will.”

PS – don’t miss our conference 21st of March on the same topic: ”Vattenbristen”.