Otso Kortekangas, postdoc at the division, has written a new book. In “Language, Citizenship, and Sámi Education in the Nordic North, 1900-1940” Otso investigates how Sámi people were affected by nation state education doctrines in Finland’s, Norway’s and Sweden’s North. 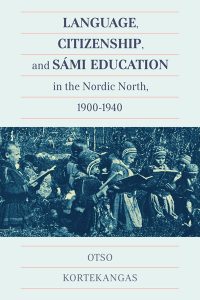 One important part of the political context in the genesis of this book is the announcement of the Finnish government to form a Truth and Reconciliation Commission in 2019. Its task is to investigate, showcase and discuss injustice and oppression done by the Finnish state towards the Sámi, with the aim of reconciliation and a better future.

Otso presents his book in the following text, first published on McGill-Queen’s University Press’ Blog on 06 May 2021.

The year 2021 will witness the start of the work of a Sámi Truth and Reconciliation Commission (TRC) in Finland. A TRC is already working in Norway, and in Sweden, the planning for a Sámi TRC is under way. The main aim of the TRCs in each country is to review and assess earlier governmental policies targeting the indigenous Sámi population in Norway, Finland and Sweden, make Sámi voices and experiences visible, and to point toward ways forward.

Differently from the Canadian TRC (2008–2015) that focused on indigenous education and residential schools, the Nordic Sámi TRCs will take a comprehensive approach to historical policies targeting the Sámi and, in the case of Norway, the Finnish-speaking Kven minority. However, governmental educational policies will be a very important theme for the commissions to investigate, as assimilation and segregation applied in education is one of the external forces that have molded Sámi culture the most during the 20th century.

As elucidated in my book Language, Citizenship, and Sámi Education in the Nordic North, 1900-1940 (MQUP 2021), different educational actors had different approaches. Sámi education was traditionally organized by the Lutheran churches in each country. The high priority the Lutheran dogma ascribes to the intelligibility of the gospel and Christianity education by large entailed that Sámi language varieties were in use as languages of instruction in many schools with Sámi pupils in the Nordic north. Gradually, the governments of Norway, Sweden, and Finland took over the responsibility for elementary education from the church around the turn of the century 1900. The governmental educational authorities and politicians downgraded the importance of Sámi language in education, as quality of education and the mastering of each country’s majority language became paramount educational aims. In Norway and Finland, assimilation to the majority population was the norm in the governmental elementary schools, with certain exceptions. The nomadic reindeer herding Sámi in Sweden’s mountain regions were de jure separated to their own group, with the obligation to place their children in specific schools. These so called nomad schools were designed after the idealized notion Swedish elementary authorities had on the “true” Sámi way of life and efficient reindeer herding.

The educational reforms of the early twentieth century that led, in many individual cases, to the tragic loss of Sámi language, had a brighter side, as well. As in many other instances of minority education, the skills and knowledge Sámi pupils gained in the schools had, at least in some cases, an empowering function. Most of the powerhouses spearheading the early and mid-twentieth century Sámi cultural movements and the Sámi opposition to government policies were teachers, educated at schools and on teachers’ training courses to navigate both the Sámi and the majority culture contexts. These teachers were pioneers of promoting Sámi culture as an active, independent culture that existed alongside and independent of other Nordic cultures and states.

While the TRCs in each country are paramount for the future relations of the Sámi and the majority populations, it is important to keep in mind that the Sámi existed and exist also outside of the frame and borders of each of the three nation states. There is a certain risk of nationalization and further minoritization of the Sámi in Norway, Sweden and Finland if the various Sámi groups are always first and foremost treated as a national minority rather than a transnational population. It is critical that this historical transnational fact, together with the diversity of voices and perspectives within Sámi education, are included in the work of the TRCs in each country. Only by so doing will it be possible to reproduce a rightful picture of historical events as a base for future reconciliation processes.

If you are interested in reading more, check out Otso’s book here.