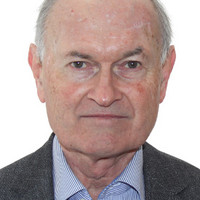 Born in Stockholm, Sweden (1946); Married with two grown-up children;
Master of Science in Engineering Physics at the Royal Institute of Tecnology (KTH), Stockholm, Sweden (1969); Doctor of Science in Solid State Physics at the same university (1973);
Docent in Solid State Physics (1975); Docent in Corrosion Science (1980);
Professor of Corrosion Science at KTH (1987-2011).
Director for Undergraduate studies in Materials Engineering and Design, KTH (1999-2006)
Dean of the School of Chemical Science and Engineering, KTH (2007-2011).
Honorary professor at the University of Science and Technology Beijing, China (2014-)

In all some 360 peer-reviewed publications. Number of citations around 14000 times with a H-index = 66.
The total list of publications in descending citation order can be seen on the website; https://scholar.google.se/citations?user=DbJew5wAAAAJ&hl=sv

2017 Marcel Pourbaix Award presented by the International Corrosion Council, in recognition for outstanding contributions to international cooperation in the field of metallic corrosion. The award goes to one scientist world-wide every three year.

2013 European Corrosion Medal presented by the European Federation of Corrosion, in recognition of his outstanding work and contribution to the field of corrosion science and engineering. The award goes to one European corrosion scientist every year.

2009 UR Evans Award presented by the Institute of Corrosion in United Kingdom, in recognition of his long-term efforts to develop techniques to investigate atmospheric corrosion mechanisms at the molecular level, to measure the surface chemistry of processes and combine this information with traditional electrochemical techniques with the aim to broaden the theoretical basis of atmospheric corrosion. The award goes to one scientist world-vide every year in the field of corrosion.

2007 Willis Rodney Whitney Award presented by NACE International in USA, For his outstanding contributions to the study of atmospheric corrosion, and for his major role in corrosion science education. The award goes to one scientist world-vide every year in the field of corrosion.

2006 Khwarizmi International Award presented by the Iranian Research organization for Science and Technology to five scientists every year who have made significant scientific achievements in art, medicine, natural science, technology or agricultural science.

2003 Herbert Uhlig Award presented by the Corrosion Division of the Electrochemical Society. The Uhlig Award was presented In recognition of sustained activity in the area of atmospheric corrosion, the development of novel surface science approaches, and the generation of considerable insight based on firm molecular foundations. The award goes to one scientist world-vide every year in the field of corrosion.

Recipient of the 1998 Fulbright Award presented by the United States Information Agency.

In addition, three former graduate students of Christofer Leygraf, Inger Odnevall Wallinder (1996), Magnus Johnson (2007) and Saman Hosseinpour (2016) received the Morris Cohen Award presented by the Corrosion Division of the Electrochemical Society in recognition of their outstanding doctoral thesis. The award is presented to one graduate student, world- wide, in the field of corrosion science every year.

Main or co-supervisor for completed PhD-theses at KTH