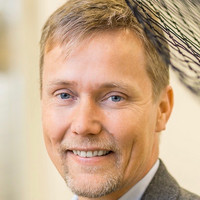 Karl H. Johansson is Director of Digital Futures and Professor at the School of Electrical Engineering and Computer Science, KTH Royal Institute of Technology, Sweden. He received MSc and PhD degrees from Lund University. He has held visiting positions at UC Berkeley, California Institute of Technology, Nanyang Technological University, Institute of Advanced Studies Hong Kong University of Science and Technology, and Norwegian University of Science and Technology. His research interests are in networked control systems, cyber-physical systems, and applications in transportation, energy, and automation systems. He is a member of the IEEE Control Systems Society Board of Governors and the European Control Association Council. He is past Chair of the IFAC Technical Committee on Networked Systems. He has been on the Editorial Boards of Automatica, IEEE Transactions on Automatic Control, and IET Control Theory and Applications. He is currently a Senior Editor of IEEE Transactions on Control of Network Systems and Associate Editor of European Journal of Control. He was the General Chair of the ACM/IEEE Cyber-Physical Systems Week 2010 in Stockholm and IPC Chair of many conferences. He received the Best Application Paper Award of IEEE Transactions on Automation Science and Engineering 2015, the Best Theory Paper Award of the World Congress on Intelligent Control and Automation 2014, and the Best Paper Award of the IEEE International Conference on Mobile Ad-hoc and Sensor Systems 2009. In 2009 he was awarded Wallenberg Scholar, as one of the first ten scholars from all sciences, by the Knut and Alice Wallenberg Foundation. In 2017 he received a Distinguished Professor Grant from the Swedish Research Council. He was awarded Future Research Leader from the Swedish Foundation for Strategic Research in 2005. He received the triennial Young Author Prize from IFAC in 1996 and the Peccei Award from the International Institute of System Analysis, Austria, in 1993. He was granted Young Researcher Awards from Scania in 1996 and from Ericsson in 1998 and 1999. He is member of the Royal Swedish Academy of Engineering Sciences, Fellow of the IEEE, and IEEE Distinguished Lecturer.