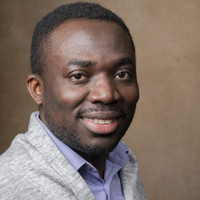 Isaac is a researcher at the Department of Industrial Biotechnology and the deputy coordinator and KTH responsible person for the Hammarby Sjöstadsverket. He sees energy and water as two major challenges facing the world today. Isaac wishes to be able to bring the two issues under the same umbrella. He has a Ph.D. degree in Chemical Engineering with a focus on Carbon Recovery System for Sustainable Sewage Treatment Plants. Isaac's research interest include recovery of pure chemicals from waste, mixed microbiome fermentation, anaerobic digestion, nanofiltration/reverse osmosis, wastewater treatment, water treatment .

Isaac has also been a doctoral researcher at the faculty of Chemical and Process Engineering at Karlsruhe Institute of Technology (KIT), Germany with a research grant from the DAAD-German Academic Exchange Service from Oct. 2015 to Dec 2017. His work at KIT was on solar-powered membrane system for drinking water treatment.

In 2009, Isaac graduated with First class Hons in Environmental Science from the Kwame Nkrumah University of Science and Technology, Ghana. Having been awarded a 2-year scholarship for academic excellence by STINT-The Swedish Foundation for International Cooperation in August 2010,  Isaac obtained his Master degree in Environmental Engineering from KTH  in July 2012.  His Master degree project was done at Hammarby Sjöstadsverk, a research pilot facility operated by IVL Swedish Environmental Research Institute and KTH. The topic of the thesis was "Systems for ammonium concentration for further removal in the partial nitritation/Anammox technology".  After his Master's degree, Isaac lecturered at the Department of Civil Engineering, Accra Institute of Technology, Ghana between March 2014 and June 2015.