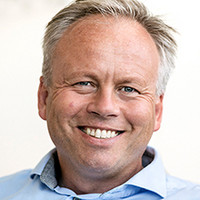 Mats Danielsson received his MSc in Engineering Physics from the Royal Institute of Technology in Stockholm in 1990. From then until 1996 he pursued research with the CPLEAR experiment at CERN, the European Facility for Nuclear Research in Geneva, Switzerland. He received his Ph.D. 1996 with the thesis titled First Direct Measurement of T-violation, based on the first measurement of violation of the Time symmetry. From 1996 to 1998 Mats Danielsson worked as a postdoc at Lawrence Berkeley National Laboratory, Berkeley, USA on research in detectors and integrated electronics for x-ray imaging. From 1999 up to now he has been employed at the KTH Royal Institute of Technology in Stockholm where he currently holds a position as Professor and heads the research division in medical imaging. Together with Staffan Holmin and Jan Andersson at Karolinska Institutet Mats Danielsson took the initiative to MedTechLabs that was approved in 2017 by the Stockholm city council and he is now scientific director for its research program in imaging. Mats Danielsson further co-founded  Sectra Mamea AB (acquired by Philips in 2011), C-RAD (listed at Nasdaq) and Prismatic Sensors (acquired by GE Healthcare in 2021). Mats Danielsson holds around 50 patents and is co-author of over 100 peer reviewed scientific publications in journals such as Medical Physics, Physics in Medicine and Biology, Journal of Medical Imaging and Nature and the articles have been referenced more than 4000 times.