Wave energy benefits from the mistakes of wind power

Is wave energy the new star of renewables? The potential is great and a research team at KTH works towards a faster development for harvesting the powers of the seas.

Decades ago, wind and solar power were promising renewables, but at that time with lot of teething problems and a long way to cost-efficiency. During the years, technology has improved and in recent years also become dramatically cheaper. Today they are part of our energy supply system with increasing importance. Next in line to do the same journey might be ocean wave energy – that means generate electricity from the potent movements of the sea.

So far,wave energy is still in an early development phase. Three years ago, Europe had wave power installations in the water corresponding to one single average wind turbine. However, the potential is great.

Fabian Schwack from the department of Machine design at KTH wants to contribute to as a fast development as possible for the renewables. He works within the field of “tribology” – the science of friction, wear and lubrication – a sometimes neglected field when developing new applications, but nevertheless crucial for any device with moving parts. All interacting surfaces in motion are affected by tribology, he explains:

In order to guarantee that the moving machine components such as bearings or gears function, the tribology must be optimal. Otherwise, components can fail and the function will be limited.

“Bearings and gearboxes of wind turbines often show high failure rates, since tribology was neglected in the beginning. Nowadays, bearings and gears show better performance as research and industry have worked on optimizations. However, it would have been more effective to address the possible tribological problems from the start,” Fabian says.

“There is little literature on tribology and ocean wave energy. Wave energy converters are mainly tested on functionality, survivability and efficiency. However, functionality, survivability and efficiency are long-term affected by tribology. Not all companies are currently aware that salty environments, oscillating movements and alternating loads are very critical conditions for the tribological components. Since the technology is still young, we can actively influence its development and prevent problems before they occur. The basic idea is to learn from the mistakes of wind energy.”

The problems arise when the wave energy converters are scaled up and have been in the water for several years. Fabian and his colleagues therefore try to minimize any downtime as the system is difficult to reach in the sea.

The team, led by Professor Sergei Glavatskih , works in close cooperation with two wave energy companies and a grease and an oil manufacturer. To get an impact in the ocean wave energy industry in general, the research group will develop an online open-access toolbox that all companies can use to investigate the tribology of their applications. In addition, they will develop guidelines on the subject of tribology and ocean wave energy. This way all companies have the possibility to identify critical components without specialist knowledge. Both the toolbox and the guideline will be open to the market.

”My aim is to use my knowledge and skills in a meaningful way", Fabian says. "Wave energy is a technology that contributes to a sustainable future. In addition, I personally think the moving waters of the seas are breathtaking!”

The wave energy absorbed into a linear motion along the buoy axis is converted into electricity by a mechanical drive train located inside the buoy. A gearbox converts linear motion to rotation motion.

This concept uses a wave energy converter which extracts energy from the vertical motion of the waves. It has two main subsystems: the rectangular float and an inverted hydro power plant. The conversion of the wave movements is realized by a turbine.

"When we think of wave power, we are led to believe that 'the bigger the waves, the better' ," Fabian says. "Waves that would be the dream of a surfer are rarely the ones that are good for energy conversion. Instead, we want to have a relatively constant wave height. It is similar to wind power in that way: we design the system for the average wind speed and prevent the system from being damaged by storms.” 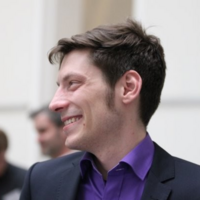