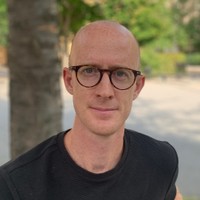 2017-03-31 - Paper Accepted in Angewandte Chemie!
New paper "Capturing the Role of Explicit Solvent in the Dimerization of RuV(bda) Water Oxidation Catalysts" accepted. Describes the interaction of the catalysts with solvent molecules along the O-O bond forming reaction. Available here.

2016-11-16 - New paper "Why Is There a Barrier in the Coupling of Two Radicals in the Water Oxidation Reaction?" out in ACS Catalysis. Available here.

2015-05-22 - Paper accepted in ACS Catalysis on epoxidation of alkenes by ruthenium catalysts with carboxylated ligands. Available on the ACS website 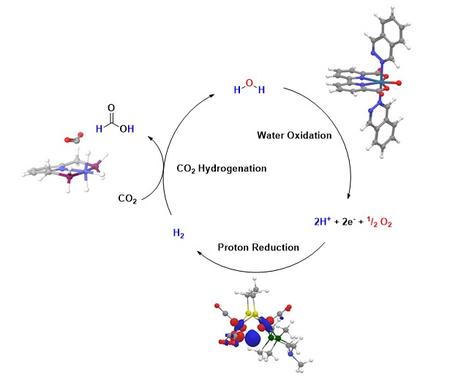 Our research is focused on the reaction mechanisms and properties of transition metal complexes. Due to their versatile and tunable reactivity such well defined complexes have been successfully used as catalysts for stereospecific synthesis of pharmaceuticals, for polymerization with high specificity, and for synthesis of bulk chemicals. We are currently investigating catalysts that could be used for storage of energy, which is crucial for large scale implementation of sustainable energy sources. When solar energy is used such energy storage is called artificial photosynthesis. The three main reactions of interest is 1) water oxidation to split water into gaseous oxygen, protons and electrons 2) proton reduction to combine the electrons and protons to hydrogen gas 3) carbon dioxide hydrogenation to formic acid, or methanol, as a way of storing the hydrogen in liquid form. 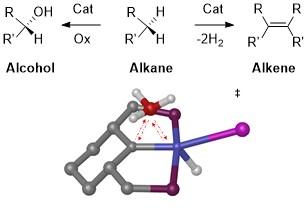 Another class of compounds that we are investigating are alkanes. Today alkanes are mainly burned for energy. An attracive alternative use is as starting material for functional materials. Since alkanes are fully saturated C-H bonds need to be activated. Due to their apolar nature and the strength of the bonds these processes are typically very challenging. Moreover, a catalyst for such reaction needs to be completely selective towards specific C-H bonds in the reactant, and not react with other bonds or further react with the product to degrade it. Our work is focused on quantum chemical modeling of the catalysts to understand their properties and to further improve their reactivity and selectivity.