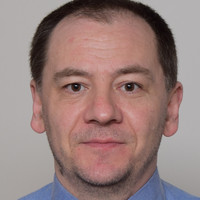 Dmitri V. Lioubtchenko was born Gorky, Russia, in May 1971. He received B.S., M.S., and Ph.D. degrees in applied physics and mathematics from the Department of Physical and Quantum Electronics, Moscow Institute of Physics and Technology, Moscow, Russia, in 1993, 1994, and 1998, respectively.

Dr. Lioubtchenko has more than 20-year experience in electrical engineering especially in the development of new materials for millimeter, microwave, and optoelectronic applications particularly, on the development of active and passive dielectric waveguides and components for the frequency range above 100 GHz. He has published more than 100 papers in refereed books, journals and conferences. He is also an author of two monographs on millimetre wave components and on dielectric rod waveguides and resonators