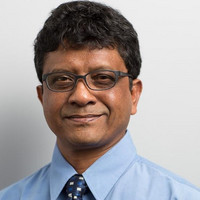 Prof. Joydeep Dutta is the Chair of Functional Materials at KTH Royal Institute of Technology, Stockholm, Sweden. His broad research interests encompass development of nanomaterials for planetcare and healthcare applications including enhanced treatment of impaired water, desalination, catalysis, photocatalysis, amongst others. He specifically utilizes visible light photocatalysis for degradation of microplastics, reduction of greenhouse gases as well as generating hydrogen gas from cellulose waste, works on capacitive desalination (removing salt from brackish water) and cleaning mining water tails. He has active work in blue energy production (from the mix of river and seawater) and novel colloidal quantum dot solar cells. One other project is related to develop multifunctional paints (anti-corrosion, antifoul and self-healing) using bioresources.

Joydeep Dutta is professor of functional materials at KTH since 2015 with research focus revolving around the application of nanomaterials for energy and environmental mitigation. A career spanning over 30 years, after post-doctoral stays for a year each in Japan and France, he spent the next a decade in Switzerland (EPFL) and the following decade at the Asian Institute of Technology (AIT) in Bangkok where he was Professor and Vice President (Academic Affairs). Prior to moving to KTH he served as the Chair in Nanotechnology at Sultan Qaboos University in Oman for four years.

He completed his Ph.D in 1990 from the Indian Association for the Cultivation of Science, India (Calcutta University). In 1991 and 1992 he did Post Doctoral work at the Electrotechnical Laboratory (ETL, Japan) and at Ecole Polytechnique (France) before moving to Switzerland in 1993 where he was associated with the Swiss Federal Institute of Technology (EPFL), Lausanne, Switzerland until 2003.

Prof. Dutta is an award winning author (Choice award for Outstanding Academic title of 2010 from American Library Association) of the book “Fundamentals of Nanotechnology”. He has also written two other text-books entitled “Introduction to Nanoscience” and “Introduction to Nanoscience and Nanotechnology” (CRC Press of Taylor and Francis Group LLC). Prof. Dutta has 250+ peer-reviewed research publications, with more than 13000+ citations (h-index 59), 11 chapters in Science & Technology reference books, 10 patents and has delivered over 100 invited and keynote lectures. He is in the editorial board of a few journals and regularly referees articles in international journals.