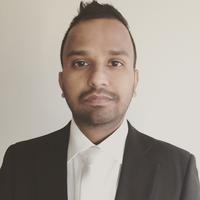 Shashi Kant received the M.Sc. degree in Electrical Engineering (signal and information processing for communications) from Aalborg University, Denmark, in 2007. He is currently pursuing the Industrial Ph.D. degree with the KTH Royal Institute of Technology, Stockholm, Sweden. Additionally, since March 2014, he has been working as a Radio System Developer with Ericsson, Stockholm, for next-generation radios including multi-standard. He founded SLK Consultancy AB, Sweden, in January 2012, where he was a Physical Layer Algorithm Consultant between March 2014 and January 2012. Between January 2012 and July 2008, he was a Senior Engineer with Ericsson/ST-Ericsson, Lund, Sweden, for 4G LTE baseband/physical layer algorithms and simulations. Between July 2008 and September 2007, he was a Research Assistant with Aalborg University. He holds more than a dozen patents (issued and pending). His research interests include (large-scale) optimization, machine learning, signal processing, and their applications to radio and baseband for wireless communications.