25 meters below Stockholm’s solid bedrock, HBO’s Chernobyl is being screened inside a decommissioned reactor for nuclear weapons. It is dark, a little bit chilly, and the atmosphere is tense. The thrilling music ends, the screen goes black, and the crowd spontaneously starts applauding. Afterwards, the reactor hall became a place of discussion. Can we learn from this show? We, three nuclear historians, think we can. Even more so, we all should. Roughly 451 civil nuclear reactors are online world-wide and 54 are in construction. This concerns everybody. 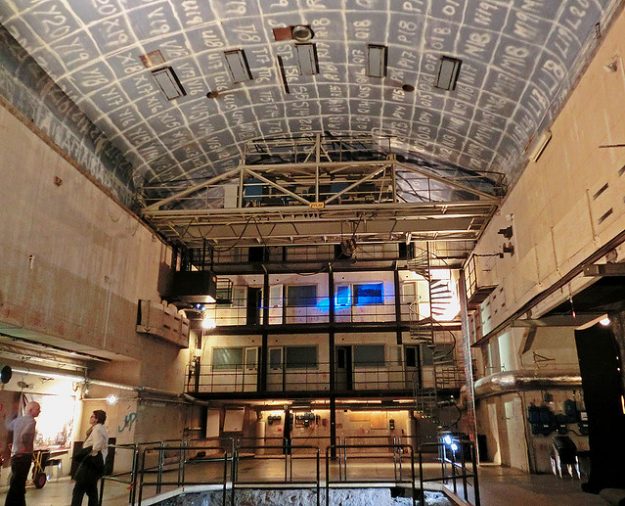 Let’s be clear about one thing: Chernobyl is a cinematographical masterpiece. Yet, apart from the brilliant acting, production, and music, the merits for the show’s success might ultimately go to reality itself. The show depicts everything; from the apocalyptic specifics of the nuclear disaster to the everyday life in former state-socialist countries. And in the end, even the best screenwriters in the world could not have been able to invent such a tragic and unbelievable story like the Chernobyl disaster.

That being said, entertaining historical fiction does not necessarily mean ‘correct’ historical drama. Is the series realistic? Craig Mazin, the writer of the series, has done a lot of research on the catastrophe. His bibliography provides a sufficient overview of the ever-growing state of the art on Chernobyl. Many of the scenes also correspond to real testimonies.
Yet, the series is and remains a dramatisation of real events. Some characters are made up and act as compilations of different real-life actors. The character of Ulana Khomyuk, for instance, embodies and symbolises a whole army of scientists that travelled to the exclusion zone and surrounding areas. The trial scenes also did not happen in the way depicted. Neither Legasov nor Shcherbina were there, and they certainly did not give heroic, truth-revealing speeches there.

The series’ creators are conscious and honest about these dramatisations. Not only in the podcast, but also in the final scene of the final episode, they reveal honestly how they altered history for dramaturgical effects. But maybe the question of correctness of historical drama is not relevant. The question is rather whether the Chernobyl catastrophe is represented correctly. Or to be more specific, whether the analysis of the disaster is correct.

Unfortunately, the answer is: yes.

What is it about?

The main message of the Chernobyl series seems to be that the catastrophe was a human disaster. It was not only caused by defective technology or operator’s mistakes, but by society, politics and technocratic culture. Hence, Chernobyl was entrenched in the deeper societal structures and safety culture of the Soviet Union.

This renders the show’s message the same as the message we, as historians of (nuclear) technology, try to convey every day: technology is human. Both its benefits and flaws are created by humans and their organisations. And this, in turn, creates risks to human beings.

It is both the first and the last sentence in the series, articulated by Valery Legasov on his audiotapes in the series. “The cost of lies” is also Craig Mazin’s explanation for the Chernobyl catastrophe. When people start lying, when transparency is lacking, and when the political system hinders the prevention of risks, then catastrophes happen. Mazin also indicated multiple times that it was not his intention to tell an anti-Soviet story nor an anti-nuclear story. He simply wanted to show the specific contexts in which huge catastrophes happen. And those contexts are profoundly human.

Pro-nuclear voices have already criticised the HBO series. It would overdramatise the accident and overemphasise the dangers of radiation. However, their arguments do not seem to be sound. Furthermore, downplaying the seriousness of Chernobyl or radiation does not help pro-nuclear voices in any way. In fact, every proponent of nuclear energy should talk about the tragic events at Chernobyl and be utmost open about it. It is the demonstration of what happens when a powerful and promising technology gets mismanaged. If there is a lasting future for nuclear energy, then its experts need to speak about, even promote, also the legacy of its mishaps. That’s why we should all talk about Chernobyl.

However, anti-nuclear voices have also taken the opportunity to refer to the series as an argument against nuclear power. Even if Chernobyl shows the enormous risks that nuclear technologies entail, generalising the Soviet situation for the entire world would not be correct. Indeed, the Soviet-bashing claim that accidents like Chernobyl can only occur in state-socialist countries has become redundant after Fukushima-Daiichi in 2011. Once again, it became clear that the social, cultural and political contexts constitute as the true causes of a nuclear accident.

In fact, every national nuclear programme is different, with different safety cultures and contexts but also common characteristics, such as secrecy, dual-use possibilities and a sense of being at the helm of technological progress. A lot of safety standards are now produced on an international level, but countries can still decide on how they implement them. Nuclear accidents can happen and have happened elsewhere as well, also in the West. Why? Because, again, nuclear accidents are protracted by humans. And humans do not only live in the Soviet Union or Japan.

In fact, it teaches us that Chernobyl is not yet finished. If our discussions in the reactor hall in Sweden have taught us one thing, then it is that the story of Chernobyl is still incomplete. There are still so many things that are unclear or left for debate. Yet, although incomplete, it remains a powerful story. And a story that has been told by HBO in a powerful way.