In a studio at KTH, a team is elaborating video recordings where the speaker make notes on a glass screen. With an air of magic, "Learning glass" lifts distance education to new heights.

A new type of filmed lectures has begun to appear at KTH. In a studio with dim lighting, a teacher stands with a pen in his hand and talks and makes notes in the air in front of him. In an almost magical way, the writing emerges in white and the notes seem to float against the dark background.

This is not a solution that has emerged in the wake of corona and digital teaching, although Amir Reza, who is the driving force behind KTH's Learning glass, admits that it fits well when much of the teaching takes place digitally.

Learning glass is developed at the Department of Learning as a tool for teachers at KTH. When the lecture is filmed, the lecturer stands behind a glass screen used as a “scribble board”, like a blackboard but transparent. While emerging on the screen, the text surprisingly enough turns out readable for the viewers, not written backwards as one should imagine. The technology has been tested since last autumn, mainly for KTH's teaching in mathematics.

” Instead of having teaching assistants who walk around a class, helping and explaining, you could record all the instructions, something that has suited them well.”

Amir got the inspiration from an American university. But despite the concept being relatively simple, they have faced various challenges when building the studio: What kind of glass was optimal, how big should it be, how should it be placed, what kind of pencils work best and what lighting is needed for it to work in the studio?

” We have tested, failed and tried again. But one thing is clear: Swedes are tall - in the next version, the height of the glass will be adjustable,” Amir Reza says.

And the Learning glass technology is popular among its users, so far.

” It’s strange, but many who normally feel uncomfortable in front of a camera are helped by the fact that there is a glass wall between themselves and the camera,” says Amir.

However, you have to prepare what to say in a slightly different way than at a normal lecture. Among other things you have to plan how you want to dispose of the glass surface.

” But the advantage is that it’s possible to edit the film, erase the board when it is full and then continue filming. It has been quick to coach those who have been recorded. Everyone who has tried is very satisfied and wants to do more”.

The rumor about the new studio and the new recordings has obviously spread quickly. Chalmers now wants help to set up a similar studio, and Amir is happy to share his experiences. During the autumn, there will be an updated version of Learning glass, where in addition to adjustable height and a slightly larger glass, it will also be possible to make projections on it. But the question remains: what is the magic of scripture that turns the right way when a person takes notes?

” Simple,” says Amir, ” as you see, all participants seem left-handed. You simply mirror the film when editing.” 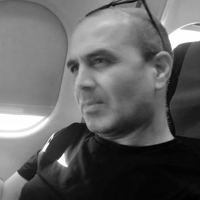