Patricia Diaz is the recipient of the Guldäpplet Anniversary Award

This year, Guldäpplet, translated to Golden apple, celebrates 20 years. The Guldäpplet's jury awards the Guldäpplet Jubilee Award 2021 to a number of people who have had great direct significance in inspiring teachers to explore and develop the digital possibilities in school together with students and colleagues during a significant part of the twenty years between 2002–2021 - when the teacher award Guldäpplet was originally awarded.

After extensive preparations, discussions, work with several reference groups and votes, the Guldäpplet jury has decided to highlight a number of people from the years 2002-2021 who will be awarded the Golden Apple's Anniversary Award. In total, there are 20 individuals / groups in five different categories.

Patricia Diaz received the award in the category "Independent national participant, lecturer, writer" with the motivation: "For deployment and inspiration around teaching and learning with digital tools." 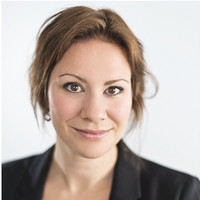