The film festival Crosscuts – another way to communicate research

Artists, researchers and activists come together with a wide audience to share a diverse film repertoire within the field of environmental humanities at the annual Crosscuts Film Festival.

“The concept of organizing a film festival in a research environment was new to me and an exciting way to address a wider audience with research. Additionally, I had felt a growing frustration regarding the difficulty of creating visibility for us as a humanities division within KTH. So we wanted to create a film festival to communicate the research in a broader way, but also to build bridges between different projects within the division, and become more visible to each other, says Sofia Jonsson, project manager for the festival as well as administrative group manager and communication officer at the division for historical studies and KTH Environmental Humanities Laboratory (EHL).

Co-founders of the festival are Marco Armiero, director of EHL, Miyase Christensen, Stockholm University and Jacob von Heland, formerly at the division of historical studies. The festival has been organized by EHL since 2018 and has been financed, among other things, by Formas and KTH Sustainability Office as well as the Center for Sustainable Built Environment at ABE.

Narrow festival but with a wide range of topics and perspectives

Crosscut's Environmental Humanities Festival for Film & Text is a purely documentary film festival; a narrow festival but with a wide range of topics and perspectives. The films discuss diverse topics, such as deep sea mining, the environmental disaster in the Aral Sea, Sami culture and how to become an environmental activist. The films are followed by in-depth panel discussions between researchers, film directors, artists and activists.

“The panel discussions are really important for the broader understanding. Research can be difficult to interpret, but the invited guests bring different perspectives to the conversation making it easy to absorb and generate discussions with strong nuances. I, who myself am quite familiar with the subjects, am very touched by the conversations and always learn something new.”

In addition to the panel discussions, the festival is mixed with other cultural expressions. In 2019, for example, poets who depicted the migration crisis were invited. Among them was the poet Athena Farrokhzad who read her poem To Europe, where the reading oscillated between Swedish and an English translation made by Athena's translator Jennifer Hayashida.

“The switch between the languages ​​really enhanced the experience. And at this year's festival, where the final film was Historjá– Stygn för Sapmí, about the Sami artist Britta Marakatt Labba, the whole festival ended with a joik by Sami activist Ylva Gustafsson. That was a very emotional experience.”

To be continued - a communication format that touches people

During the first two years, the festival was a collaboration with Bio Rio at Hornstull and thus really reached out to a wider audience. After the pandemic hiatus, the festival is now back but in a smaller version and the venue has been changed to Ångdomen at KTH.

“This year the festival lasted only for half a day, and it remains to be seen how it will be organized next autumn. This type of project always has different challenges, above all when it comes to financing but it is also challenging to market the event. There is always a lot going on at KTH but also in Stockholm. But it is definitely a format that we want to continue to develop. I would also like to create a Crosscuts podcast!”

It is clear that the festival is very much appreciated by the audience, who always give generous criticism afterwards. Even the panelists often get in touch and say that it was both interesting and fun to discuss with people from disciplines that they would not otherwise meet.

“This year, there was even a visitor who sketched small drawings of what he saw on stage, which he then posted on Instagram. So it really is a festival that gives the audience in-depth insight into widely different topics in the field of environmental humanities, and which they are touched by, Sofia Jonsson concludes. 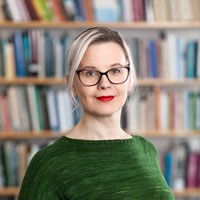 This is the 36th article in the School of Architecture and the Built Environment's series of articles on selected research, education or collaboration initiatives from each department. You can find the previous articles here:  Archive