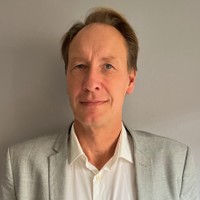 My research in Experimental Nuclear Physics is based on studies of nuclear reactions at major international accelerator facilities; currently primarily GANIL, France, the JYFL Accelerator Laboratory, Finland, RIKEN, Japan, FAIR, Germany, but also ISOLDE at CERN, and the Argonne and FRIB facilities in the USA. I lead the Swedish participation in the international Advanced Gamma Tracking Array (AGATA) project which is designated a Research Infrastructure of National Interest by the Swedish Research Council. Making use of methods and technology developed in fundamental science research I work with developments of applications in Nuclear Safeguards and Nuclear Security as well as Medical Imaging and Radiation Therapy,  in collaboration with the Swedish Radiation Safety Authority, KTH Innovation and Vinnova.

I received my M.Sc. in Engineering Physics from the Royal Institute of Technology in Stockholm in August 1987, following a diploma work project in Experimental Particle Physics performed at Institut des Sciences Nucléaires, Grenoble, France. From then on until August 1992 I pursued research in Experimental Nuclear Physics  at the Manne Siegbahn Institute of Physics, Stockholm and the Niels Bohr Institute (Denmark) and Daresbury (UK) accelerator facilities and obtained my PhD degree in August 1992 with the thesis titled ”Interplay of Collective and Single-particle States in Neutron Deficient Transitional Nuclei”. From 1992 to 1995 I worked as Postdoctoral Research Fellow and subsequently  Staff Term Scientist at Lawrence Berkeley National Laboratory, Berkeley, USA with research in nuclear structure physics and radiation detector development until I took up a position as Assistant Professor at the KTH Royal Institute of Technology in April 1995. I was awarded the Docent degree (Associate Professor) of Physics at KTH in March 1996, became Senior Researcher  at KTH in April 1999, Senior Lecturer in July 1999 and hold the position as Full Professor of Physics at the Department of Physics, KTH since October 2003.

My research has received funding from the European Commission, the Göran Gustafsson Foundation, NordForsk, the Swedish Radiation Safety Authority, the Swedish Research Council, Vinnova, and the Knut and Alice Wallenberg Foundation. I have been main supervisor for more than 25 M.Sc. theses and 10 Ph.D. theses, and I am co-author of more than 250 scientific publications in international peer-reviewed journals such as European Physical Journal (formerly Zeitschrift für Physik A), Nature, Nuclear Instruments and Methods in Physics Research A, Physical Review C,  Physical Review Letters, and Science Advances. Reviewer for European Physical Journal, IEEE Transactions on Nuclear Science, Journal of Environmental Radioactivity, Journal of Physics G, Nature Physics, Nuclear Instruments and Methods in Physics Research A, Nuclear Physics A, Physics Letters B, Physical Review C, and Physical Review Letters. Member of the Editorial Board for the international scientific journals Instruments (2018 - 2020) and Applied Sciences (2021 - ).