In the master studio Northern Grounds, the students were given the assignment to suggest a design for a new railway station in Kiruna. The station had to be adapted to the location and the assignment included using parts of buildings that were being razed. The studio used drones from the DiSa lab and scanned representations of building parts. The result was interesting, rich in information and beautiful.

A recurring part of the studio Northern Grounds – a project course at master’s level for architectural students, initiated by Ulrika Knagenhielm-Karlsson and Cecilia Lundbäck and that in the spring of 2022 was led by Ulrika Knagenhielm-Karlsson and Erik Swahn – is the problematization of architectural issues, cities and landscapes in the north as well as relations between infrastructure, energy and architecture. But the objects of study differ. This year they took a closer look at Kiruna, where buildings are moved and razed when the city gets a new location. The student’s assignment was to design a new railway station to replace the old one that was torn down almost ten years ago. The overarching question circled around what it means to dismantle, reassemble and recycle buildings.

“We went to Kiruna with the students and studied what will perhaps be razed, and what has already been dismantled”, explains Ulrika Knagenhielm-Karlsson. “The students documented a lot of the material by scanning it and we documented the location of the new railway station.”

The student’s suggestions and more in Northern Grounds’ social media

Ulrika Knagenhielm-Karlsson and Erik Swahn used a drone from the DiSa lab to shoot the planned location for a new station. To use a drone they were required to register with and obtain a remote pilot certificate from the Swedish Transport Agency. Since they were shooting less than five kilometres from the airport they also needed to be in contact with the airport traffic control tower and ask for permission before they flew. On a couple of occasions, they were instructed to land the drone to maintain safety margins. Apart from that, the only difficulty lay in seeing the drone when they were blinded by the sun. The advantages of the drone are otherwise that it is very precise in position, height and angle and allows the user to observe the world in three dimensions.

“All in all we were in Kiruna, Abisko and Torneträsk for two days”, says Erik Swahn. “Scanning doesn’t take that much time but you must plan the work, know where to fly and what information you want, e.g if you need details or general information. We had planned it well and thus it didn’t take much time.”

The students meanwhile used mobile phones and cameras to document, and measure buildings with photogrammetry, around Kiruna as well as the railway station in Abisko, designed by Folke Zettervall, which resembles the old brick station in Kiruna.

“Some students found it exciting to work with scanning since it is so detailed and takes the everyday wear, tear and dirt into account”, says Ulrika Knagenhielm-Karlsson. “Making site visits and meeting people is important, also during studies.”

Back at the campus, the students downloaded their files from the journey into a photogrammetry program on the powerful DiSa lab computers. Even with those computers, it can take a long time to enter the information and the students had to find new ways to work where they chose select parts of scanned buildings to work with for their site models.

“It’s necessary to find ways of working to combine the abstract and concrete”, explains Ulrika Knagenhielm-Karlsson. “The students in the studio develop different techniques to work with both lines and geometry – abstraction – as well as with points and highly detailed information. They developed very interesting and beautiful models that were rich in information. Seeing those models gives you much more than if you would only see a geometric model composed of lines.”

Ulrika Knagenhielm-Karlsson and Erik Swahn will continue using the technique with scanning and drones in their teaching, e.g. since those are very good tools to get an impression of a location. Compared to a map it’s more difficult to work with since you get so much information about the existing world. But at the same time, it is easier to make an intrusion when working with blank paper. In the studio, they noticed that the students became more careful when they experienced a real place with terrain, bush wood, houses and a lot of details. 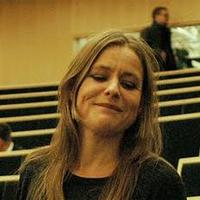 This is the 35th article in the School of Architecture and the Built Environment's series of articles on selected research, education or collaboration initiatives from each department. You can find the previous articles here:  Archive