Hans Edin has realised his life-long ambition, that of becoming a professor. Now, in his 27th year at KTH, he’s enjoying passing on his enthusiasm for his subject to others.

Ever since he was a boy, Hans Edin hoped that one day he might become a true professor. “I started dreaming of becoming a professor from when I was perhaps nine or ten,” says Edin. Even his old classmates used to call him ‘The Professor’, and some still do. His passion used to be history: he could memorise and recount all the names and dates of the Kings and Queens. But soon his subjects became chemistry, physics and mathematics. Edin moved from Kings and Queens to pi. “I would recite it to about 50 decimal points, he recalls.

Recently promoted, officially to Professor in Electromagnetic Engineering, Edin grins as he says “It means that I’ve reached my life’s career goal”. After a little thought he continues: “I don't know what happens next. I'm not sure if there will be any further ‘career steps’. My future plans are really to deliver research and education of a high quality – that is my main aim. Over the past few years I have been busy in a number of areas so it’ll be good to concentrate on research and teaching.”

A ‘number of areas’ include being Chairman of the KTH trade union (2,000 members) and programme director of the SENSE programme (Smart Electrical Networks and Systems) within the EIT/ InnoEnergy initiative.

Alongside his research, Edin makes it plain that delivering education in Electrical Engineering that is truly fit for purpose is now his key aim. “I really love teaching. Unfortunately I don’t always have time to be fully up-todate with all the modern teaching methods and technologies. As a professor you don’t always have the time.

“You can work on anything from signal processing to control systems.” Edin entered the School of Electrical Engineering at KTH in 1990, where he joined the school’s EE programme.

“My main area is high voltage engineering, which involves all the big systems in the power grid including the high voltage lines. It’s most interesting when you come down to the specific details, such as ‘why is the distance between the power lines four metres and not half a metre and not ten metres?’ It’s about, amongst other things, the breakdown of the air. This is one parameter that is completely determined by the ionisation of single molecules, single atoms when they are stressed in an electric field. It’s about atomic physics with real technical applications.

“I find this is very beautiful, the electron structure of molecules determining the distance between power lines.”

Despite the amount of work in the department and other activities at the university he has a fulfilling life outside of KTH. He relishes taking on any projects no matter how small or large at home.

“I prefer to do things by myself, which is sometimes a drawback. I’m pretty stubborn. I’ll do any tiling or plumbing or general work that needs doing at the house, including electrical connections. I think, in fact, that I’m still a two and a half year old with an ‘I can do it myself’ attitude.”

Outside of his main research work in insulation and diagnostic methods for the high voltage grid, Edin acknowledges that his life has gone full circle.

“It’s 27 years since I first came to KTH. I haven’t gone anywhere else. As I come up the road at the start of each new term I realise how things have changed. Now it’s a passion for highvoltage electricity that drives me and the students I come to work for.” 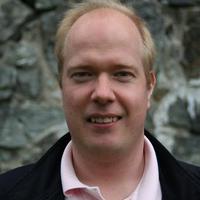