"Sorry, but this particular robot is incredibly bad at doing anything"

Hello, Dimosthenis Kontogiorgos, congratulations to having your paper nominated for the Best Paper Award at ICMI 2021!

Could you tell us a bit about the paper, what was it about and who has worked on it?
“This paper was a collaboration between KTH and the Institute for Creative Technologies at the University of Southern California during a research visit. The idea of this paper emerged from previous studies we conducted at KTH in interactions between humans and robots in collaborative tasks. We noticed that the robots we had designed were very often failing during the interactions, also in very basic tasks such as understanding when someone says ‘yes’ or ‘no’, or even sometimes recognising there is a human in front of them. While these failures happened mostly due to technical issues, we noticed how people consistently reacted every time the robot would do errors in attempts to recover from the failure and continue with their task. So we asked, what if we control for failures and attempt to model human reactions to such moments of miscommunication? What we did next was to design robots that would instruct humans to do a task and would be programmed to fail in particular moments during the interaction. We then built machine-learning models that observe human behaviour and predict in real-time that the robot has done something wrong.”

What does this nomination mean to you?

“I am currently writing my dissertation so this was in fact the last paper I presented during my PhD. It was also my first nomination in a highly competitive conference, so I am glad to have received a nomination to the same conference I was getting papers rejected during my first year of PhD! We presented this work at the International Conference in Multimodal Interaction in Montreal where they hosted a hybrid conference and it was great to be able to present it in person again, after a long time. While the nomination indicates our paper is in the top 5% of the papers this year, the award was given to my good friend Lucien Maman and his colleagues at Télécom Paris for their excellent work in modelling conversational dynamics.”

What has been the most fun part about this research?

“Some of the funniest moments conducting studies with failing robots is when you observe your participants realising there is a mismatch between their expectations of ‘general Artificial Intelligence’ and these robots we present them that are actually designed to fail. So you can see people coming in to the lab, after they have seen our participation announcements, very excited to see robots in real-life, and talk to them, and you can't actually say ‘sorry, but this particular robot is incredibly bad at doing anything’ until after they have completed the study. Some people were a little disappointed from our robots I think, so we may not see them again in any of our new studies in the future.” 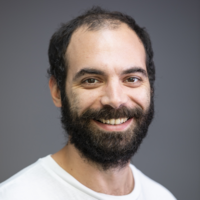