1) Do selective unit testing. Don't implement a lot of code and then expect it all to work. If it doesn't (likelihood: it won't ...;-) how will you locate the error? Divide and conquer.

2) Use a pen and paper to solve problem subsets first. Try to work a math problem out on paper first, or manually simulate how an algorithm works for a simple situation. If you sit down and try to code straight away, you are trying to solve multiple difficult issues at once. First solve and understand the model/math using pen and paper. Then solve the programming issues. Especially, if you solve the programming issues in the sense that your program compiles, you will still need to think deeply about the algorithm if your rendering has errors in it.

3) Be critical of instructions and attempt to understand equations. Trying to directly implement equations without understanding what they do or their relationship to the overall algorithm will guarantee many hours of wasted time in the labs and the real world.

For some, the most difficult initial aspect of the labs is getting the programming environment up and running with the skeleton code. The large number of various operating systems, development environments and versions make it difficult to provide a single solution. The following details may therefore be helpful for setting the labs up on your particular configuration:

A quick tutorial on Ubuntu system can be found here.

A useful guide can be found here by previous DH2323 student Victor Dahlin on conducting a setup in Microsoft Visual Studio 2013. Fangkai has a newer version that runs on Visual Studio 2013 (VS2013) and which can be found here. Note that in order to easily enable cout output to the console, you may need to set the project to be a console application in the properties menu.

For the students using VS2015, you may encounter the problems as posted in the News feed. The reason is in Visual Studio 2015, stdin, stderr, stdout are defined differently. The lib files downloaded from SDL homepage were compiled in VS version lower than VS2015. We recompiled the SDL lib files for VS2015 (download here), which you should use instead of those in the original download. Henrik Dahlberg made a template for VS2015 for those who want to use SDL2.0. SDL2 GLM VS15 Template and SDL2-2.0.4. Place the folder in the second link directly under C:\ and it should work.

For students using cmake to generate project, new lab1 source code should be used (for the following labs, you could modify CMakeLists file). The only change is the CMakeLists file where 'find_package' is not used considering the installation of SDL in Windows is a bit rusty. Fangkai tested it on VS2017 using the new compiled SDL libs.

There are some misprints in the Lab 3 documentation (not difficult to spot, hopefully...):

3. On page 14, the reflectance element of the Vertex struct should be represented a vec3 and not vec2 as printed.

Hints:
Issues with triangle borders (or gaps) being drawn may relate to missing out the drawing of pixels in one of the loops related to triangle filling operations. Check the starting and finishing conditions of those loops.
On page 14, the Light power of 1.1f * vec3(1,1,1) is not enough to give clear illumination. Try the value from the previous lab of 14.1f * vec3(1,1,1), especially if you are not getting good results for the illumination questions at the end of the lab.
Per vertex illumination is implemented in the vertex shader using eq. 10 and 11. The normal vectors of vertices are identical to those of triangles in this scene.

In code, that translates to:

1) The illumination and position vectors of the Pixel struct should be multiplied by 1/Z in VertexShader to be interpolated correctly.

2) The values are then restored in the DrawPolygonRows function (by being divided by the zinverse)
before being sent to PixelShader.

More detailed descriptions of the problem and derivation of the solution is available here:

Be careful of the following:
Accidentally converting floats to integers: Make sure your floats are being evaluated as such, and not being converted to integers. E.g. be careful of using "zinv = 1/vtx.z" instead of the correct "zinv = 1.0f/vtx.z"
If you are having segmentation fauls, you need to implement some form of bounds checking i.e. if it is possible for a vertex of a triangle be placed outside of the view, it would access the depth buffer out of bounds resulting in a segmentation fault.

This only applies to the animation track.

I heard that a lot of people had problems getting the particleLab to work in Visual Studio 2015, the solution seemed to be to just install VS2010 to get it to work. I thought there had to be a better solution to this and decided to figure it out.

I have replaced the (very old) glaux library with SDL and changed the code a bit to make it work.

The updated lab files can be downloaded from here: https://drive.google.com/open?id=0B0yEGehsNLYASmhQb3lROTNzemc

As far as I know, the old version of particleLab should work on any version of VS up to (and including) VS 2013 (which is installed on University computers), so this problem is just with VS2015?

Also, don't forget to see the fix to this issue that I previously posted (the fix itself is somewhat obscure, but quite straightforward and quick to apply). Let me know if you do not know what I'm talking about.

I didn't try it myself with older versions of Visual Studio. But from what I heard it does indeed work with 2013, my mistake.

Maybe these updated solutions can make life a little bit easier next year.

Since Lab3 just reuses the code from lab2 there is not much that needs to change, I've made a new, updated solution that includes the SDL library so it is easier to use.

What workloads should i choose while installing VisualStudio? I chose the Desktop development with C++ and Universal Windows Platform Development, but can't seem to find the same configuration alternatives as the tutorial uses.

We will have a lab session next Monday. I will be there to check what is the problem. However, I think choose default settings will work. 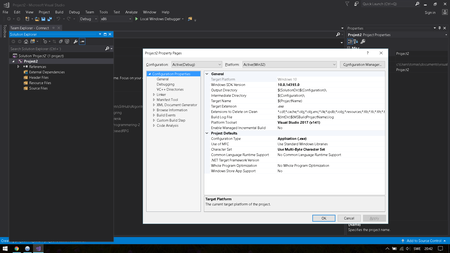 Alright, I might not be able to attend the lab-session on monday since I have lecture in Kista about the same time, but here is what i see while trying to configure in VisualStudio. I have the 2017-version, do you think that might be of importance?

Do this: After you have completed step two in Fangkai Yangs tutorial, jump straight to step 12 and 13, then jump back to step 3 and continue as normal, you will se that the "C/C++" tab how now appeared. (Microsoft apparently decided to do some changes in how VS2017 handles project files etc compared to previous versions). Also, don't forget to use the new compiled lib-files (see link on this page), these work on VS2017 as well.

I plan on doing a renewed tutorial covering VS2017 and post on this page (no promises though...), one with fewer steps.

Great job! If the tutorial for VS2017 is done, email me a link and I will update our "hints and tips".

Hi Im using mac and xcode 7.01 as in the tutorial. But I don't have a "MainMenu" file I have instead something called "Main.storyboard" should I delete that one ?

Its working. but there is some question marks next to the imported libraries. Just want to make sure that it won't cause a problem. 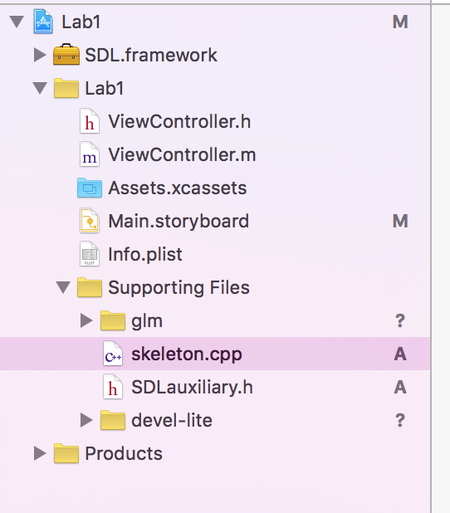 Accessible to the whole world.

Tags: None so far.