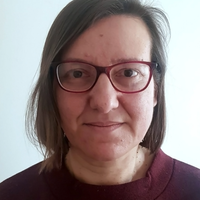 Designing the sound of the future

Listening Across Discilines II (I am a partner in this AHRC project by Prof. S. Voegelin (PI) and Prof. A. Barney (Co-I))

More about my research...

My background is in Physics (MPhys(Hons), Manchester) and Music (Classical Guitar, Conservatorio “G.Tartini”, Trieste, Italy), education which I have combined in my MSc and PhD in Music Technology at the University of York, UK.

After my MSc and during my PhD, I worked as a Research Assistant on two EPSRC funded projects. The first of these, the COSTART project, was based in the Computer Science Department of Loughborough University and aimed at studying the relationship between artists and technologists during the creation of digital artworks. The second project,Data mining through an interactive sonic approach, was based in the Electronics Department of the University of York and focused on displaying data structures, present in complex multivariate data sets, using sound synthesis and interaction. This research formed also the basis of my doctoral thesis,Interactive non-speech auditory display of multivariate data.

Throughout my career I have had a number of management roles including: