3.1 Setting up the teams

The division of students into project groups can be determined by the teacher, the students themselves or jointly. A solution where all team members can achieve the learning outcomes at roughly the same level of challenge and workload is desirable, but can be difficult to achieve. If the students get to choose for themselves, it is common that they are looking for friends or like-minded people because it's more convenient. This might be an advantage if the project task is relatively limited in scope and in cases where the assessment focuses on the outcome rather than the group's process. A homogeneous group often works more effectively in such forms, compared to a heterogeneous group (23). But if the project task is more extensive and complex, by having a heterogeneous composition the team members open themselves up for creativity and alternative solutions to problems.

To encourage heterogeneous compositions, the teacher should explore the students' background and abilities before project groups are defined. The cultural and social diversity in a heterogeneous group typically gives rise to more complex group dynamics, which is desirable in cases where the process is in focus. To reduce the risk of serious conflicts that hamper the work of the group, it is important that students are aware of and open-minded towards differences, and are encouraged to try to understand each other's perspectives when communication fails.

In larger projects, where different roles are necessary in order to organize the work efficiently, a challenge often emerges around the division of roles.   How this is done can depend both on the nature of the intended learning outcomes and the composition of the team. Is it possible to reach the course learning outcomes in all roles? For example, if one of the intended learning outcomes is for all team members to gain experience of working in various roles, then this will be a guiding factor. But if it not, it can be beneficial to let the students choose their roles themselves. It can also be beneficial if it is a heterogeneous student group, since different members then can contribute according to their own conditions and thus feel greater affinity with the group at an early stage. In this context, it is important that group members communicate about different ambitions and take joint responsibility for ensuring that everyone gets enough challenge and a reasonable workload.

An Example of teachers dividing students into teams while students divide roles and change roles within the teams in the course Integrated Product Development:
Since we want heterogeneity among the students in the teams, the teachers divide them into different teams. We base the distribution on educational programme, gender and sometimes even grades. We can also match according to which courses the students have taken to distribute competence, and complementary, the students do a team role test, Belbin’s team roles (22). The results give us an additional basis to reach heterogeneity within the groups.

The students must themselves decide upon how to divide the different roles within the team. They usually solve it democratically; it is rarely the project manager who allocates roles. Groups structure the projects based on what they want to do and often students have preferences on which role they want to take. Sometimes we push students to test other roles as well and we support students to seek another role if they ended up in the wrong position.

For pedagogical reasons, we have large project teams with 12-16 students as this requires more organisation. We do not think that the students should be in the same roles throughout the entire project and therefore we conduct a reorganisation of the team. In this way, students can find new positions and learn about more than one possible role in a project. This takes some energy and focus from the product, but the students know that it will happen and it is an important part of the course and the ILOs. The course run over two semesters and after the first few months of the project, the groups need to change e.g. project manager and sub-team leaders. 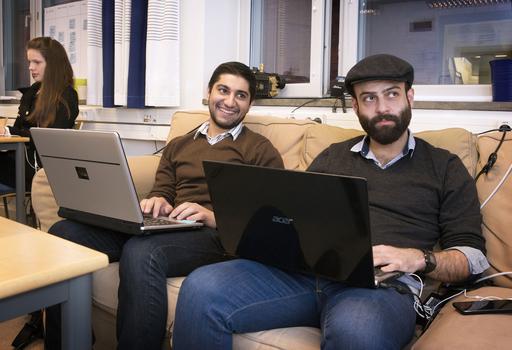 Team roles according to Belbin (22): “Co-ordinator, implementer, specialist, completer-finisher, monitor-evaluator, resource investigator, plant, shaper, and team worker.” These team roles are not equivalent to the formal roles of a project team, rather they cover roles that are necessary to create an effective team. To make the team as effective as possible, all roles should be taken. However, one team member can have more than one role.  An effective team should have at least four or five members. (24)

An example from the course Communication Systems Design: Students write an application in which they indicate which project they are interested in. The applications form the basis for the distribution of students to the different teams. We also take into account the expectations and concerns that the students stated in the applications.  The students come from different educational programmes at KTH, and the teacher takes into account the different educational backgrounds and competences to make the groups as heterogeneous as possible.The groups appoint a project manager and the team members determine who will get the assignment. The groups are encouraged to arrange teambuilding activities at the beginning of the course and then distribute the different roles.

An example from Future of Media: In this course, the students choose projects through a voting process in which most students will get their first hand or second hand choice. Therefore, they have an influence on which project they will work in, but they cannot choose who they are going to work with.

An example from Open Lab: The students have the possibility to apply for a project that they are interested in. Since the goal is interdisciplinary groups, we base the decision on the wishes that students have done but we also take other aspects into account, e.g. gender, which universities they are studying at and their Belbin-role, to make groups as diverse as possible. Within the projects, there is no distribution of roles, partly because the groups are small, but also since in design thinking, it is important that all team members are involved. In line with the Scrum-method, the groups are self-organizing and cross-functional (see 2.4.2), and all team members must be able to work in every step of the process.

Suggestion: Before dividing the students into teams, consider the intended learning outcomes of your course. If you have an objective on performing the roles in a project, make sure that the students can take on the different roles of the project. When setting up the teams you can take what aspects of the project the students are interested in into account, but it is also a good idea to consider their competence, gender, and educational background, and sometimes even personalities, to make the teams as diverse as possible.