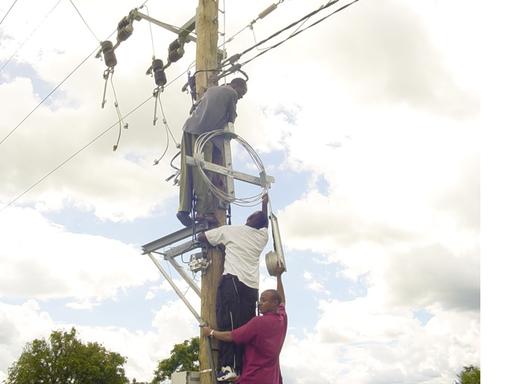 Installation of solar-powered router in Tanzania

Starting in 2005, fifteen student teams, with an average of six students per team, have worked on a series of consecutive projects to develop the Serengeti Broadband Network. The students have been part of the development of the broadband network itself and of the services the network provides. The network is now in operation, but there are still several challenges to solve, including operational aspects, local ownership and leadership, and utilizing the full potential of the network.

Students have participated in the projects as part of their Master's degrees and have been part of the development work for six months at a time. They have worked under the supervision of a Doctoral student, who has run the projects as part of the Doctoral research. Under the supervision of the Doctoral student, the Master's degree students have been the muscle that has delivered the project. Working on the projects has developed the students to a remarkable degree. They often report  that  course was the one where they really learned something of value, for example that it pays to work together and how to put this into practice.

The students have designed Serengeti Broadband Network  itself and have developed a router so that the network can function in the difficult conditions in which it is located, for example in the heat and with an unreliable electricity supply. To achieve this they based the router on one that functions in a high performance context exchanging   some components to reduce the energy requirements of the router. They have also adapted the router so that it is not reliant on electricity grid supply but can instead run on solar power.

The students also had to develop a new battery technology, as traditional lead batteries become too warm in the heat and there are no resources to top up the batteries with water. They have  set out the routers and tested that they work. The new battery is capacitor-based and uses what is known as ultra-capacitors as cells, where every capacitor holds a charge of 3,000 Farads. This is many orders of magnitude greater than traditional capacitors.

The broadband currently links the two district capital cities of Mugumu in the Serengeti and Bunda in the Bunda district. The fiber is also accessible in the rural Nata village, a settlement of around a hundred homes. The village has a secondary school and a health centre. These are so far the primary pioneering customers for the network in these rural areas.

The need for broadband services in the area covered by the network is similar to the need worldwide. The local authorities can use local websites to disseminate information and there is also a health portal being developed in cooperation with Stockholm’s Karolinska Institute and University Hospital. There is a huge potential for further development. To date only a small fraction of the local capacity of the network is being utilized.