A common model for team development (25) is shown in figure 1. If the students have enough time and support (or enough experience), and a project assignment that is well-designed for the purpose of creating valuable team processes, they can overcome the phases of looking at their own needs firstly, then being concerned with how the team functions, and finally being mostly focusing on looking at the task and how to solve it together. Sometimes a team can go through the stages forming, norming, storming and performing several times, sometimes they end up in one stage, and sometimes they never reach the performing stage, going back and forth between storming and norming for example.

During the forming stage, students can be very polite. They are normally more concerned with them-selves, how they act and talk. This stage is also called honey-moon. The supervisor can, besides talking about the assignment, and expectations, help the team members to get to know each other and discuss group dynamic issues that are natural and how they will be monitored. 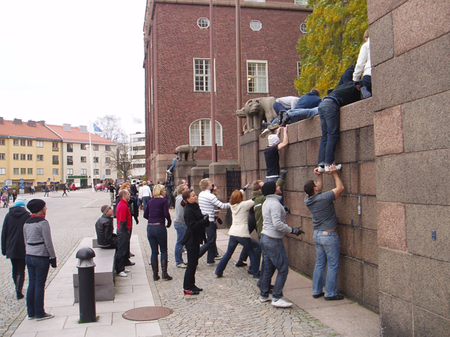 Team-building and ice-breaking activity in Integrated product development.
The student teams are asked to make sure the whole team gets from one side of the wall to the other, by climbing over it. No student can climb the wall on his/her own. By this, the teachers are aiming at helping the students to start trusting and helping each other. Photo: Margareta Norell-Bergendahl

The storming stage often differs between groups, from dramatic to quite easy. Normally, issues and concerns about other team members, or about the assignment or the coaching meetings, are raised during this stage. If the supervisor isn’t asking or looking for signs of storms within the group, there is a risk that the team keeps these issues to themselves. In this case, the student team might get stuck and not move forward to a high performance stage. There are some important signs for storms, or upcoming storms. Drops are when productivity or quality goes down. Plops are when you notice deadly silence in response to someone’s ideas. This can cut off creativity from the group; reasons for it could include some students just wanting to get on with the work, or not all students feeling they belong to the team. When students have hurt feelings or frustration over, for instance, the project task, the team, or their own role in the team, you might experience a pinch here and there. Pinches can be formulated in sarcastic sentences, or shownwith body language. When you as a coach notice a pinch, it’s best to mention it. Otherwise it can blow up to a crunch where students leave a team, refuse to solve the task and so on. (26)

The supervisor’s role is to support the team through the storming stage – as far as possible. The supervisor should not  stay in it, or  try to walk beside it (by for instance pretending they don’t have any disagreements, or have made any mistakes), or  try to solve the issues separate from the team work simplistically  (by for instance dividing tasks or switching teams) or  over-dramatize the issues. Help the students to see further than today’s issues, try to take your own emotions aside and don’t run to conclusions too quickly.  Students don’t have to be happy with all their team members nor all tasks within the project, but respect and follow agreed rules.

Example of a team exercise: How I am in teams

Gibbs argue that as all students probably have experience from working in teams in different settings, such as in sports, education, clubs etc, they bring with them all kinds of feelings, thoughts and good ideas for how teamwork can or should be carried out. By bringing this out in the open quite early in the process, students and teachers can become more aware of themselves and each other and hopefully create a better start. (27)

In this exercise, students are asked to go through four stages:
1.What teams I have been in: think on your own first, and then take turns with your team members and tell your stories.
2. Write your answers to the following questions on your own:
In teams I tend to…
In teams I tend to avoid…
I like teams where…
I don’t like teams where…
How I’d like to be in this team...
How I’d like this team to be for me...
3. Each team member, one at a time, without interrupting each other, shares what they have written on the question sheet.
4. Finalize the exercise with building strategies to make the team successful.

Example on how students write team contracts from Lightweight Design/Naval Design:
The students write and sign team contracts that state rules for the project teams. Each group decides their own rules and the team keeps the contract for themselves, hence they are not collected by teachers. If there are problems in a team, the teachers remind them of their contract, and usually this works in the sense that the teams solve their own problems by themselves.

When students are focusing on setting up ground rules, and discussing how they can work well together as a team, they are in the so-called norming stage. As a supervisor it can be fruitful to show different team work and communication models. By monitoring the task and role divisions, the supervisor can make sure that all students are involved in the project as a whole. Avoid letting so called draggers dominate and set the rules without including all team members. (26)

When, and if, the students finally are in a high performing stage, where all team members feel they themselves and all  team members can contribute and learn from the work, it can be fruitful to have them discuss this and give each other feedback on these aspects. How did they end up in this stage? How will they use this experience in future team work? Can their experience be used somehow in other teams who are not so successful, yet?

This exercise can be integrated in coaching sessions several times during a project course, making comparisons over the weeks possible. It could also be integrated on a study program level, so that students can compare different teams they have been in. If you prefer, you can change the name of the exercise into What’s going wrong, and change the statements below accordingly. The original exercise, by Gibbs (27) had this name, but we are suggesting that a more positive approach can make the exercise more constructive, and also make it applicable on successful teams.

Students are asked to go through three stages in this exercise:

1. Use the checklist to analyse your team, on your own. Check all statements that you agree with, and perhaps you need to change the wordings so it fits better with your team. Add extra comments too if you like.

2. Try to agree what strengths and problems the team have, by sharing your checklists and identifying the total score each statement has. You may need to be concrete and give examples when sharing your lists, both on good and bad team work signs.

3. After you have agreed on what’s going right and what’s going wrong, decide what to prioritize and build a strategy on how to solve the signs of weaknesses. Also include a date when you will repeat the exercise.

Suggestion: To secure that the students learn about effective team work, it is a good idea to offer exercises throughout the course focusing on the team processes.